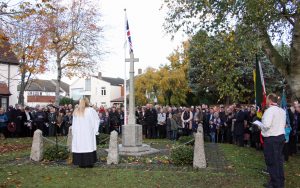 Residents from throughout the widespread parish come together for an annual act of remembrance at the memorial to our war dead.

There are approximately 1400 households, predominately occupying privately owned homes spread through the 2570 acres within the parish boundary.  National and regional statistics show the parish is consistently rated as one the best places to live in England with its healthy and industrious community resulting in a low-crime environment.

For the main settlements, population figures given in the local development plan documents show 936 for Wyatts Green, 829 at Blackmore and Hook End with 637 .   Including the residents of outlying areas, the estimated total population in 2021 is 3,028.

As an indication of the unique character of this gem of an Essex parish, within its borders there are 59 English Heritage listed buildings, including at the heart of the designated National Conservation Area, the exceptional Grade One listed St Laurence Priory Church.  In addition, the moated site at Fingrith Hall Farm is a registered ancient monument and the windmill mound of Blackmore Mill (burned down in 1874) at Hay Green has been nominated for the local heritage register.

The most recently available survey shows that 77.9 per cent of the population are categorised as Christian.  21.2 per cent have no religion.